“This is a process of rediscovery and trying to make the Confluence become a community asset once again.” 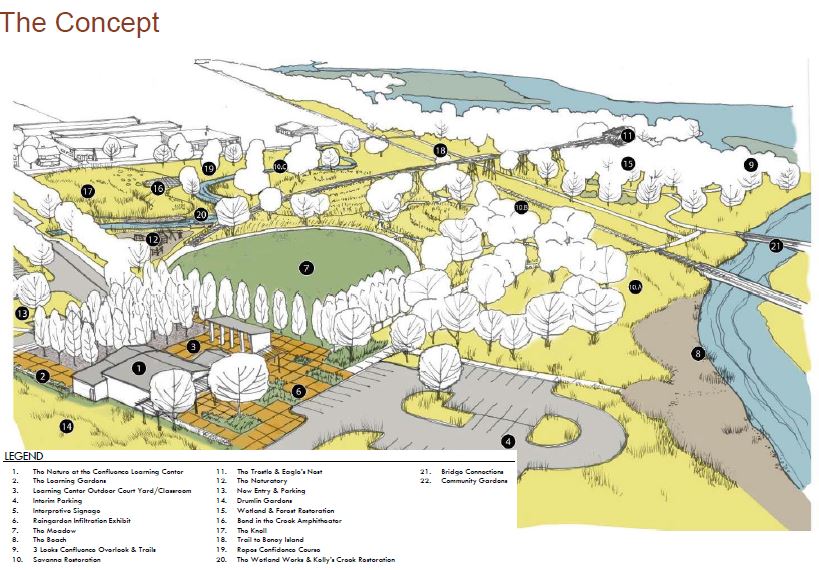 South Beloit is located at the Confluence of the Rock River and Turtle Creek. These streams have played a key part in the history and development of the city. They’ve provided diverse habitats for plants and animals, and also have a rich history of being utilized by people.

The Confluence plays an important part of South Beloit’s future as well. Located just yards away from two City Halls, Beloit and South Beloit; Beloit College, major employers and public schools, the Confluence is at the center of the Rock River Trail, a National Water Trail, and has potential to become an attraction for outdoor recreation for families and visitors alike to the area.

Beloit 2020, organized in 1989, has focused its redevelopments plans for Greater Beloit on the Rock River corridor. The framework for this project was done in 2005 and picked up steam six years later, when Beloit 2020 concentrated on the portions of City Center joining the cities of Beloit and South Beloit. The working boundaries of this project are west of Blackhawk Boulevard to the Rock River and between Charles Street on the South to Shirland Avenue on the North. Most of the project area is in South Beloit.

In 2013, Beloit 2020 decided to develop a leverage fund for a project called Nature at the Confluence. This fund will be used to begin the process of transforming the area centered on the Confluence of the Rock River and Turtle Creek from a liability into an asset. Today, the Confluence is surrounded by blight and contamination, all within a flood plain. “Many of the buildings were not being taken care of properly,” says Jeff Adams, Beloit College professor of Economics and a longtime 2020 member. “We’re working to change that.”

The Confluence Project is a continuation of 24 years of trying to rebuild the city center and South Beloit as the Rock River flows through it. “We’re calling this a project for 2020 because of two meanings – one for the organization name and two we hope by 2020 we will make significant progress,” he says. “We have to think long term.”

There is plenty of natural beauty at the Confluence, as well as history. The higher ground around the confluence, especially on the south side of Turtle Creek, served as habitation sites for native people going back to the ice age. The area was used by people called the “Late Woodland,” between 400 and 1100 A.D., who built most of the mounds in the region, lived in small villages and spent their time hunting, fishing, and gathering plants. The confluence was the site where Joseph Thibault sold his “three looks of land” to Caleb Blodgett, who, in 1837, sold one third of the property to the New England Emigrating Company, which founded Beloit.

“What was a terrific asset for 150 years has since been forgotten,” Adams says. “This is a process of rediscovery and trying to make the Confluence become a community asset once again.”

The Center at The Confluence will be renovated and be ready for opening in June 2016. You can visit the area at 306 Dickop Street, South Beloit.