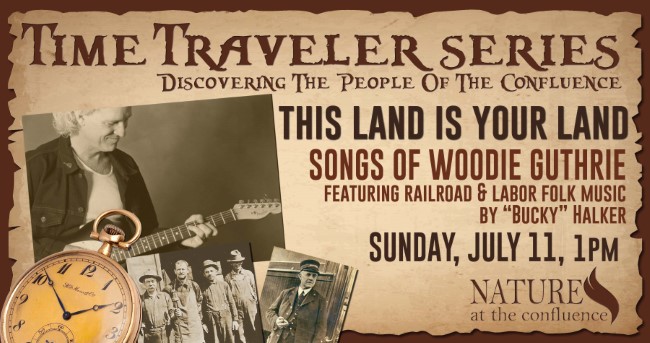 This is a program Of Our “Time Traveler Series” which is supported by a grant from the Greater Beloit Chamber of Commerce Ambassadors.  Bucky’s performance is brought to the community through the Illinois Road Scholar program.

Program Details: Illinois Folk Singer Bucky Halker will  have you spellbound as he musically weaves the story of the people who labored and lived at the confluence land…from the men who rode the rails and lived in encampments during the depression era, to the Irish workers who toiled to build the railroads, and the men who labored in the foundries We invite you to join Bucky Halker for a musical program with commentary that features folksongs of Illinois and songs from Woodie Guthrie.

Woody Guthrie (1912-1967) is America’s most legendary folksong writer. His music continues to uplift and excite musicians and audiences around the world. Inspired by Guthrie’s most famous song, This Land Is Your Land features the performance (guitar and vocal) of several Guthrie songs, as well as commentary on the time period and each song. The program also places Guthrie and his music in a larger historical context while also offering details on his life.

About the presenter: Bucky Halker is a musician and historian with 15 albums to his credit, including “Anywhere But Utah: Songs of Joe Hill” (2015), honoring martyred Swedish labor songster Hill, “The Ghost of Woody Guthrie” (2012), an original music tribute to Guthrie, and “Welcome to Labor Land,” featuring renditions of historic labor protest songs from Illinois. Halker, a Ph.D. in labor history, is the author of For Democracy, Workers, and God: Labor Song-Poems and Labor Protest, 1865-1895 and the producer-scholar for the Folksongs of Illinois CD series, vols. 1-5. He has received numerous awards, including the Archie Green Fellowship from the American Folklife Center in 2012, and served as guest professor in Germany at Carl von Ossietzky University in 2016. Since 2007 he has been the director of Company of Folk, an organization devoted to folk and ethnic arts and traditions in Illinois.

Illinois Humanities is supported in part by the National Endowment for the Humanities (NEH) and the Illinois General Assembly [through the Illinois Arts Council Agency], as well as by contributions from individuals, foundations and corporations.

Any views, findings, conclusions, or recommendations expressed by speakers, program participants, or audiences do not necessarily reflect those of the NEH, Illinois Humanities, our partnering organizations, or our funders.

Would you like to be informed of new programs about the history of the confluence? Sign up below.