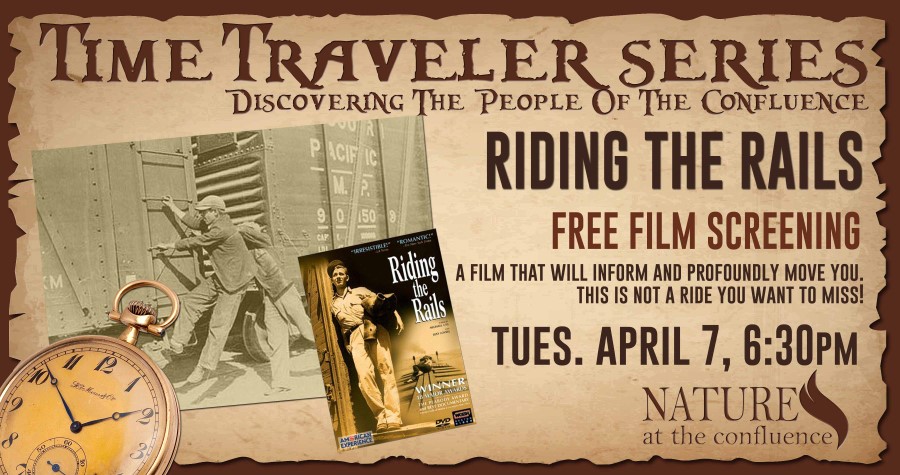 The Confluence area was once home to a “hobo jungle”, a gathering place and encampment of men (and sometimes women) who rode the rails.  We present the PBS documentary Riding the Rails to tell the poignant and little-known story of teen hobos during the Depression in the 1930s, a time of desperation and bitter hardship.This documentary is a winner of 18 major awards including the Peabody Award and Best Documentary.  Riding the Rails is that rare film that will inform, dazzle and profoundly move its audience. This is not a ride you want to miss!

Nature At The Confluence is now bringing new life to the beautiful land along the Rock River, creating hiking trails where people once camped. But the memories of the “hobo jungle” still linger and we feel the history of that era is an important thread in the fabric of our American story and our community’s story that needs to be told and preserved.

Ever since track was first laid for the great locomotives, hobos have listened to the call of the rails, lured by the possibility of free transportation to another place—if they could make their way unnoticed and unharmed. They rode the rails for various reasons—to escape economic hardship, satisfy an urge for adventure, or simply to feed their wanderlust. Along the way, they developed their own culture…the hobo culture.

The Great Depression forced 4,000,000 Americans away from their homes and onto the tracks in search of food and lodging. Riding the Rails is the story of the youth that either ran away or were forced to leave home during the depression. This documentary interviews people from different backgrounds who hoboed in the 1930’s while they were still in their teens. It tells of the tough times families were enduring, often causing young people to try to provide for themselves. It seemed as if the elusive jobs were always someplace else and the rails were an accessible means of travel.

The documentary captured interviews of people that actually road the rails as teens. “Some hadn’t spoken of their experiences in sixty years. They poured their hearts out to us,” says director Michael Uys. “They were just kids then and when they look back, it’s with a blend of nostalgia and pain.” Riding the Rails vividly combines the clear-eyed memories of witnesses with archival footage of teens riding atop speeding trains and newsreel interviews with lean-bodied kids full of bravado.

The film features a rich soundtrack of American folk tunes of the time, including songs by Woody Guthrie, Elizabeth Cotten, Doc Watson, and Jimmie Rodgers. Do you love music from that era? Don’t miss “Goin’ Down The Road” : Songs of the Confluence featuring railroad and labor folk music by Bucky Halker. Held Sunday, July 12, 1pm. Learn more.

Would you like to be informed of new programs about the history of the confluence? Sign up below.